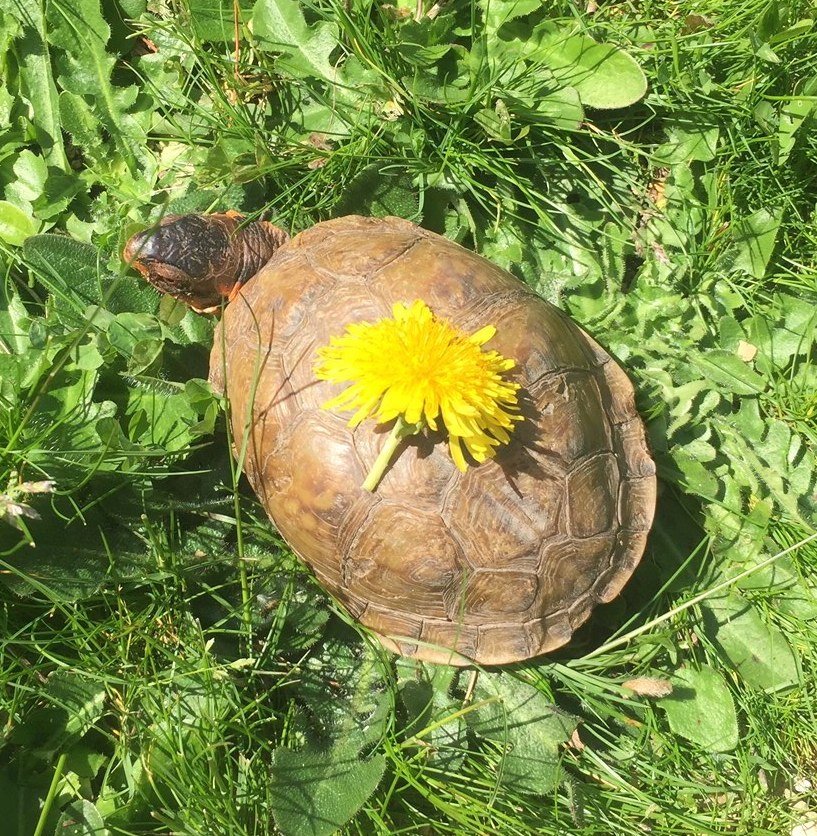 I found a turtle up on the hill behind my house the other day and it made sense. My talk with many of my clients recently had been around boundaries, you see, so it made total sense that I would happen to find a turtle. At least that’s what I told myself as I walked down the hill with it fitting snug in my hand.

I’d never found a turtle before and never even held one. This one fit in my hand perfectly, and I could feel its warm mass beneath its shell. It was closed tightly, head and tail and arms and legs all shut tight away.

A lot of my clients wish they had better boundaries, wish they had that thick body armor a turtle has and that it would be that easy to retreat to safety. But for some reason, it’s difficult. It’s not that they aren’t hurt by things that happen, that they don’t feel anger, or sadness, or resentment, or emotional pain, or even physical pain,* that they don’t want to escape the situation. It’s just that, for some reason, they are unable to set a good boundary – to say, through their words or actions, no, this is not okay, and I’m not willing to continue being a recipient of this behavior.

This isn’t an easy question to answer, and often needs some deeper work around it. Perhaps, as a child, you were not allowed to have needs. Maybe you got into trouble whenever you got upset, and you learned to not show emotion, to not speak up. Maybe one (or both) of your parents needed you to take care of their emotional needs, and so you learned that your needs weren’t important. It often comes down to a key perception of self that is carried from childhood – whether it’s your needs aren’t important, or you aren’t lovable, or when things go wrong it’s your fault. Or that you have to be the “good one”, that your job is to tend to others’ needs at the expense of your own. For whatever reason, it can be hard to set good boundaries as an adult.

And this has a cost. We’re hurt by not having good boundaries, and our relationships suffer as well when we don’t speak up. We don’t speak up and get resentful. We don’t speak up and so our partners think that everything is fine, but really a lot is not fine and one day you may end up in my office, poised to leave your relationship because you can’t take it any more. Or we may be allowing others, like our parents or in-laws or coworkers or boss, to control aspects of our life or relationship that are really not theirs to have a say about. We may think it’s easier to just let it go than to set boundaries – and sure, sometimes it is. But when this is a pattern, it can cause great distress.

If you recognize yourself in any of these scenarios, take heart! You can learn how to set healthy boundaries. It takes a bit of forethought and intention, but it can be done.

I break down the requisite steps to my clients in this way: first, recognize the boundary violation; then, craft a kind boundary-setting response; then, state that response to the one violating your boundary (multiple times if need be); and finally, follow it up with some action if necessary.

You may recognize the boundary violation easily, or it may be difficult. Take Marsha,** for instance. She was finding herself increasingly irritable with her husband, Steve,** after they got married. With a little digging, it became clear that the boundary violation was not with her husband, as might be suspected, but rather with her mother, who was finding it difficult to let Marsha differentiate into her new family unit. Her mother kept giving controlling advice and not letting up until it was taken. Marsha had tried to set boundaries but had inevitably gotten sucked into an escalating interaction, much as she had as a teen.

Together, Marsha and I crafted a simple statement to say to her mother. “Thank you for your opinion. I will figure out what to do with Steve.” This serves a number of purposes – it not only acknowledges her mother, but it also states autonomy and allies Marsha with her husband into a couple unit. And, it is kind.

I helped Marsha craft a backup statement if her mother got too escalated, which was, “Mom, I appreciate you wanting to help. But Steve and I don’t need your help at this time. I will let you know when we do.” If this is still generating a reaction, Marsha can say, “This is getting too escalated. I need a break and am going to hang up/leave the room. Love you!”

The key is to stick to those statements. Don’t get pulled into discussions and arguments about what happened last time, or why in the world would you do that, or blah blah blah. Just write your statements down (I jokingly tell my clients to tattoo them on their arms) and stick to them.

When Marsha decided to try to set boundaries in this way, she was nervous. But, she decided to try it and see. And when she did, she was surprised by how empowered she felt. Having set statements at the ready allowed her to remain calm and remain in control. She only had to resort once to leaving the conversation, and her mom eventually got the point.

Her mom eventually got the point, and Marsha felt stronger both individually and in her relationship. And it became easier for her to set other boundaries once she had this success.

I muse all of this as I set the turtle down in the sun and watch it for a while. It remains shut, and then tentatively pokes its head out. It pokes its head out, and stretches up to look about. After some time, it lumbers off at a fairly good turtle clip. I pick a dandelion and place it on its beautifully patterned shell. It carries the flower with it as it heads off to do whatever turtles do on a fine spring day.

*If you are in a physically abusive relationship wanting to set boundaries, I recommend you get support through a domestic violence agency such as Lifewire (https://www.lifewire.org) or DAWN (http://dawnrising.org). In an emergency, please call 911.